The dreariest space in our Tsujido house was the kitchen, so to make it more cheerful, I decided to make curtains for the one little window in the room. Our neighbor, Mrs. Tsuchida, had an old pedal -style sewing machine that we could carry over to our house for me to use, but she was mystified about why I would want to make curtains for the kitchen. She felt, as I think that most other Japanese women did at that time, that the kitchen was only for women to use so why make it beautiful.

I’m not sure if it was the beauty of the curtains that I made or the bits and pieces of food left on the counter that attracted a cute little mouse who would come out for a visit every evening. Even from the 6-mat room down the hall we could hear his/her arrival in the kitchen.  We kept a tea cup on the counter for the used matches, after lighting one of the gas burners, and this visitor always knocked it over as it scurried along the counter top, notifying us that it had arrived. It would then come peaking around the corner of the room where we were, just checking in.

Three years later, in our Kugenuma-Kaigan house, I wasn’t so happy to have another kitchen visitor as this one wasn’t small and cute. One day, with my back to the old cupboard, I reached in for something I automatically knew the location of, turned around, and to my horror, I saw sitting on the shelf a large, ugly rat.

This rodent later appeared one evening fearlessly walking down the hall near the room where I was teaching a class of high school boys who immediately became heroes. They used an empty cardboard box to capture the rat and proceeded to bury it in a deep hole in the park in front of our house. We thought that was the end of the rat and we would never have another kitchen visitor; however, we later discovered that mice had gotten into the oven of our stove and had torn up the insulation.

Neither one of these two kitchens was what you would expect to see pictured in a Better Homes and Gardens magazine.  The Kugenuma-Kaigan kitchen was larger with better appliances than the Tsujido house: we had the 3 burner stove with an oven, while the former house had only 2 gas burners and a portable oven; it had a refrigerator that kept food frozen while in Tsujido the one we bought for 3,000 yen from the junk shop didn’t. The second house was older and the floors in the kitchen so weak that one day I fell through the floorboard in front of the sink.

Obviously the disadvantages of these two houses didn’t deter our kitchen visitors who were definitely not snobs about where they liked to hang out. 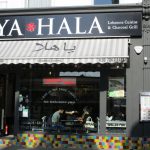